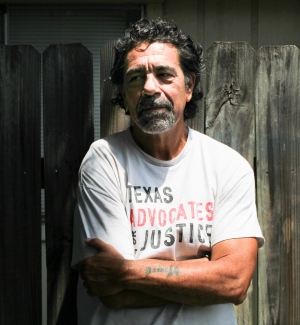 Jorge’s mother, Marina, crossed the Rio Bravo at 15 to escape a violent husband and began a family tradition of rebellious individuality and disdain for authority. Twenty-seven years later, while eight months pregnant, she ventured into New Mexico and, surprisingly, birthed Jorge Antonio, her oldest son, the only child of nine not born in Tejas.

Raised by Marina and her second husband, Roberto, Jorge grew up in the Texas Panhandle and quickly became adept at using both grubbing hoes and #2 pencils. The Renaud family followed la cosecha until settling in Beeville in 1971. Jorge dropped out of high school at 17 and joined the military, the first of many ill-planned encounters with coercive institutions.

After being sexually assaulted while in a South Texas jail at age 19, Jorge began a 32-year odyssey of addiction and robbery, spending 27 years in Texas prisons. Caged for the last time in 1991, Jorge was released in July of 2008. He is serving the rest of his 60-year sentence for robbery on parole, pointing to his resilience and Texas’s determination to hold him close.

Jorge has a BS in Psychology from Sam Houston State University; an MSSW from the University of Texas at Austin; was the 2020 Poet in Residence for the Civil Rights Corps; and is the 2021 Writer in Residence for the Texas After Violence Project. He has published poetry and essays across the country. He is a prison abolitionist with one paramount tenet – no human is disposable. All else stems from that.