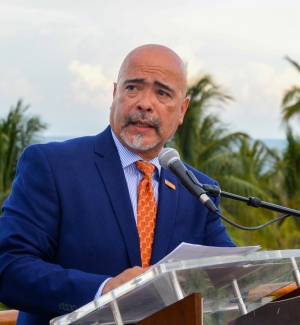 "There is an urgent need today … to analyze the intersection of police reforms, changes in the penal system and drug policy in this country. In reality, Latinos are disproportionately and negatively affected by police and criminal system practices that discriminate against them but rarely involve them in forging solutions."

One of the nation’s leading voices on equality and nondiscrimination, Constitutional and Civil Rights Attorney Juan Cartagena inspires change to systems that marginalize communities of color. As a public speaker, El Diario columnist, and Rutgers University lecturer, Juan focuses extensively on Puerto Rican and Latino rights issues, including the community impacts of mass incarceration.

Juan is a graduate of Dartmouth College and Columbia University School of Law and is the recipient of multiple recognitions, including Dartmouth College’s Martin Luther King, Jr. Social Justice Award, and the U.S. Hispanic Leadership Institute’s Cesar Chavez Community Service Award. Juan lives in and represents the State of New Jersey, having previously served as a Municipal Court Judge in Hoboken and as General Counsel to the Hispanic Bar Association of New Jersey.

Have a question for him or a thought about his articles? Tweet him @LJCartagena!

Close Rikers to Address the Violence of Jail Discrimination – For Now was originally published on City Limits here.

Rikers, like all jails, is dangerous, but even more so because it thrives on violence, is inaccessible to families, and is hidden from view. It is part of a pretrial jail system that is half-empty but easy to forget. Every day that someone spends on Rikers, where nearly everyone is presumably innocent, is a day that produces trauma, pain and unnecessary dislocation from family and work. For far too long, New York City has taken the easy way out by looking the other way as Blacks and Latinos, already deemed of less worth, suffer from horrendous pretrial conditions and violence, and exposed to even more criminality.

The movement to close Rikers Island is not the brainchild of elected leadership. The movement is led by the very people most impacted by pretrial detention, by their families and friends and supporters. I am one of their supporters who had the opportunity to study the harm and, along with the other members of the Lippman Commission – the body of advocates and leaders appointed by former Council President Melissa Mark Viverito—proposed a blueprint for closing the cruelty that lies in the Rikers jail culture. That plan confronted an average daily population of 9,500 at Rikers. Today, we have 7,000 people in city jails with estimates placing it, in a few years, at 3,000 people. In a city of 8.2 million residents and millions of visitors every year, this is a remarkable feat in the transformation of criminal justice systems.

The Commission led to a policy change by Mayor de Blasio which is now embodied in a land use review process that requires the City Council to approve the replacement of Rikers beds with jails closer to families in four boroughs. Public funds are clearly needed, and replacement capacity is necessary because the current capacity of non-Rikers jails is below 2,300 beds and all of them are decrepit and incapable of providing programming for other services that would make pretrial detention more humane.

Here lies the heart of many objections: Are we able to, and should we, create more humane cages? Our goal in the community-led movement is to not only close Rikers, but to finally discard the notion that imprisonment is an acceptable form of social control. If the goal is to eliminate the danger and do no further harm, then what exactly do we mean if we accept new jails that would be more humane?

It means that we must work within a vision towards abolition by rejecting the notion that jails are an acceptable place for our people to receive mental health services, become educated, or avail themselves of social services that should be provided to them in the community. Jails cage poor people of color and inculcate violence, inflict trauma and contribute nothing to public safety. Indeed, they divest public dollars from the very programs that would render them obsolete: education, health treatment, job creation, and sustainability.

It means that since New York City is replacing jails within a diminishing caged population, not building jails to increase capacity, those new facilities must be designed with repurposing in mind, not permanency.

And it means that in the meantime, the movement must have a principled way to address how to segregate those among us who commit violent acts that upholds the needs of their victims without depending on law enforcement, prosecutors and courts. Until we address violence head on – from our nation’s sordid violent history of conquest and slavery, to interpersonal violence in our neighborhoods, to the structural violence of systemic discrimination—we will never fully abolish the cages that dominate our societal response to crime.

I can see a day when Rikers jails are permanently closed – it requires legislation to ensure that any mayor will not backtrack and keep that closure in mind – and that is still our immediate goal. Today, if it takes smaller, replacement jails to close Rikers, then the mayor and the City Council must pay heed. We will then eventually need to close the new ones as well.

Juan Cartagena is the president and general counsel of LatinoJustice PRLDEF