Solitary confinement is terrible, but so is regular prison

This article was originally published in the Texas Tribune here.

At what point do those pursuing criminal justice reform truly take their direction from those who have been in the bowels of brutality? I’m speaking specifically about the tendency of organizations, individuals and the media to hammer the idea that solitary confinement is torture. My purpose here is not to argue with that notion, but to point out that that narrative minimizes the astonishing violence and terror that stalks the halls of every general population prison hallway.

Without a nuanced interpretation of the torture that is inflicted on every individual in a cage — whether she lives by herself or is surrounded by dozens of other individuals convicted of crimes — the “solitary confinement is torture” narrative consigns every other prisoner to indifference. In addition, that narrative perpetuates the myth that every individual who gets out of long-term solitary will be unable to successfully reintegrate into their community. That narrative also continues the demonization of the mentally ill.

A recent story in Vice promised that death, or at least bloody mayhem, were all one could expect from the “worst of the worst” who had spent time at the ADX Florence supermax prison in Arizona. Another story in The Intercept was headlined, “How solitary confinement kills,” referring to a suicide in a private detention center. And Vox decried the damage done to the 61,000 individuals in solitary confinement in U.S. prisons.

And yet, recent stories — many in the websites mentioned above — have highlighted the unchecked violence, and yes, torture, borne by individuals incarcerated in Alabama, Georgia and Mississippi. Talk with individuals who have spent any length of time in an American prison — especially younger men, many of whom are bought and sold each day for a pair of tennis shoes and a few bags of coffee — and you will begin to understand why thousands of incarcerated individuals across the country do anything they can to be assigned to safekeeping, or to solitary confinement, just to get out of the day-to-day violence inherent in prison.

In Texas prisons, the numbers are even more confounding. In 2016, a joint report by the Texas Association Against Sexual Assault (TAASA) and the Prison Justice League (PJL) found extraordinary numbers of prison rapes — almost 59% of them committed by staff members — reported by individuals incarcerated. That study echoed similar conclusions reported in a Newsweek story of 2016, “Texas: The prison rape capitol of the U.S.”

With such unchecked sexual violence in Texas prisons, is it perhaps just a coincidence that the state has, by far, the highest administrative segregation population? Just a year ago, the Texas Observer pointed out that there were over 4,200 individuals incarcerated in ad seg. Were those individuals undergoing torturous conditions? Of course. Were many of them there as the result of having done what they could — assaulting other incarcerated individuals or staff, or committing what offenses they could, just to get assigned to ad seg because of the daily torture being inflicted on their bodies and spirits in the general prison population? Of course.

Ironically, Vox quoted the eloquent Albert Woodfox, who with the others in the “Angola Three” spent a combined 109 years in solitary confinement in Louisiana. Stories highlighting the undeniable deprivations of solitary confinement disregard the grit and resilience of the human spirit. Even in solitary, one can communicate with others, develop one's mind and intellect, create a support system via snail mail, etc. What one cannot do is nourish the social skills that are at the root of much of the failure of many of those who are released from a cage — but being in the general prison population doesn't do much to nourish those either.

Many, if not most, of the individuals serving long-term time in solitary have mental health issues, and it is problematic to blame violence or expect it from those individuals. We've all seen "locked up" videos on YouTube, the snarling voices issuing threats between the rusty teeth of the food slot, and we tend to think, "Oh my God, they must all be that way!" That simply isn't so, and while most are released without having received mental health treatment, more pointedly, they have not received any therapy for what was likely a life of trauma and the behavior it caused.

We should condemn all cages, not just those that we have been told are necessary because certain individuals are beyond redemption — monsters who must be kept out of sight, without access to the basic human needs of touch and conversation and some type of human contact. 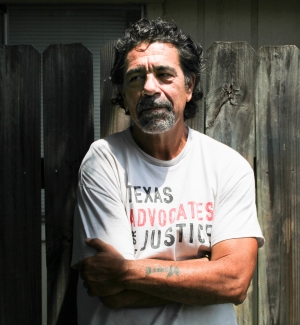 Jorge Renaud
Regional Director of Policy and Advocacy for the Southwest

Born in New Mexico but raised in Texas, Jorge is the son of a farmer of Louisiana descent, whose family moved to South Texas over 150 years ago, and a mother who waded the Rio Bravo at 15. He is an Army veteran, has a MSSW from the University of Texas at Austin, and is the proud father of Catarina Amelia Renaud. As a Policy Analyst at the Texas Criminal Justice Coalition, Jorge authored dozens of bills in 2013 and 2015 that addressed Texas prison conditions and parole supervision.

As a Senior Policy Analyst at the Prison Policy Initiative he authored numerous studies examining ways to alleviate this country's obsession with incarceration and disproportionate sentences. Jorge has published poetry and essays across the country. He was also previously incarcerated for over 27 years. Jorge has been an integral part of Reenvision Justicia’s network of Latinx organizers, lawyers and policy analysts for years and a regular and popular speaker at LatinoJustice annual convenings of Latinxs and the Criminal Justice system.