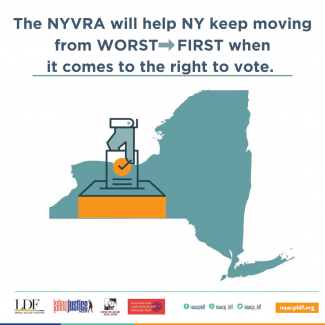 LatinoJustice and our partners in the New York Voting Rights Consortium explain the need for and benefits of the NYVRA in a new fact sheet.

State lawmakers are actively considering the John R. Lewis Voting Rights Act of New York (NYVRA, S.1046A / A.6678A).  This transformative law would build on successful state voting rights acts already on the books in California, Washington, Oregon, and Virginia to provide voters of color the most comprehensive protections in the country.

New York once had some of the most restrictive voting laws in the nation. Policymakers in Albany have made progress toward establishing a new reputation for the Empire State as pro-democracy, but their job is not finished. Even today, there are persistent barriers to equal participation by Black, Latino, Asian, and Native American voters: district lines that weaken Black and brown voting power, inaccessible polling locations, inadequate language assistance for voters who don’t speak English, and even outright voter intimidation. And New York’s registration and turnout rates still rank near the bottom, with even lower rates for voters of color.

The NYVRA builds on the strongest parts of the landmark federal Voting Rights Act of 1965 to protect New York voters against discrimination.  The General Assembly is considering the law in 2022—just in time for New York to lead as other states move backwards and Congress struggles to move forward on voting rights.