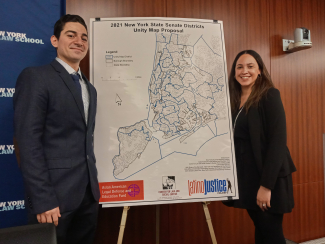 LatinoJustice PRLDEF, a national not-for-profit constitutional and civil rights law office that defends the rights of Latinos in the United States. It provides general outreach and technical support in Unity Mapping and redistricting assistance for non-partisan groups

UNITY MAP COALITION:
The UNITY MAP COALITION, AALDEF, CLSJ, and LatinoJustice have been at the forefront of nonpartisan redistricting to protect communities of color for the last three decades. During the last Redistricting cycle in 2010-11, the Coalition successfully advocated for the adoption of its historic Unity Map for the 2010 Redistricting Congressional districts in NYC, the State Senate and Assembly, and the New York City Council. This Coalition rewrote redistricting history in NYS and serves as a model for the nation of collective advocacy and power sharing by diverse racial and cultural communities within a jurisdiction.